From the May 2011 Newsletter

We are very grateful to Fitzroy Silverthorne for bringing this wonderful photo to the 2010 Gathering, and now we have this fascinating article about their mutual greatx3  grandfather written by Fitzroy’s cousin, John Silverthorne (of Fareham) 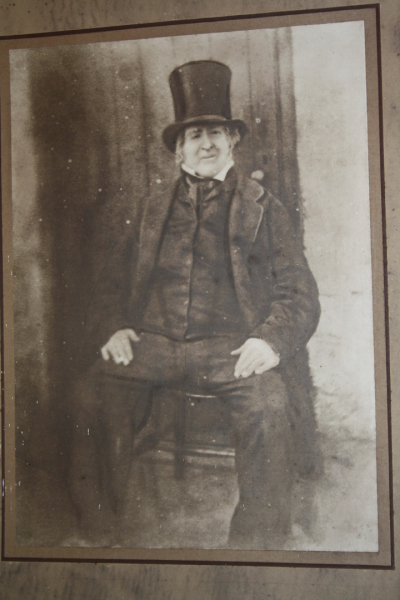 This photograph of John Silverthorne (1785-1868) in his uniform as Head Coachman to the Duke of Beaufort at Badminton House is one of the earliest Silverthorne photographs and was probably taken in the late 1840s.

His wife, Elizabeth (1786 -1863) was also in service to the Beaufort family and at this time she was the Housekeeper at Badminton House.

These were both highly responsible positions.

In the pre motor car era, the stables and coach-house at Badminton would have been vital to the smooth running of the household. It provided an efficient, reliable passenger transport service for the Beaufort family and their many visitors for all their frequent journeys and excursions. John’s role was not only that of personal driver for the Duke and his family, but also that of transport manager for the large and complex establishment.

Elizabeth’s assignment also demanded a wide range of personnel and organisational management skills. The Housekeeper directed and co-ordinated the activities of a large staff of domestic servants to ensure that all the public and private rooms, bedrooms and furnishings were regularly cleaned and tidied, beds made, bed linen and other household linen changed and laundered. All of this was done by hand without any of the modern housekeeping gadgets. Since the Beauforts regularly entertained large residential house-parties, Elizabeth’s role would have been similar to that of a modern manager of a busy all-inclusive hotel.

John and Elizabeth’s six children were all born at Tormarton (then part of the Badminton estate) and some of them were employed by the Beauforts.

With the coming of the Great Western Railway travel became much easier and their son, John Silverthorne (1819-1889) and his wife Caroline (1821-1893), together with eleven of their thirteen children, all born at Tormarton, emigrated to South Wales in the 1860s.

Even in this migration the Beaufort factor had a significant input. The Duke of Beaufort would only grant permission for the railway to cross his estates on the strict understanding that all passenger trains, even the London to South Wales express trains, must stop at his tiny rural station at Badminton! Thus John, Caroline and their large family were able to travel in speed and comfort across the River Severn to take advantage of the many business opportunities in the economic boom of the developing South Wales coalfields.

The Beaufort factor can also be seen in the names of John’s descendants. Fitzroy, Herbert and Somerset are all names closely associated with the Beaufort family and starting with John’s son, Fitzroy (1854-1904), these Beaufort names appear on Fitzroy’s family tree right down to the present generation.

By the 1930s Fitzroy Silverthorne’s sons and grandsons were once again in Beaufort territory, establishing a grocery and bakery business at Raglan – ancestral home of the Beauforts.

In the late middle-ages Raglan Castle passed by marriage from the Herbert family to the Somersets (who later became Dukes of Beaufort). The Beaufort Chapel in Raglan church contains tombs, memorials and effigies of several Beaufort ancestors and the Beaufort Arms Hotel dominates the centre of the village.

The first Lord Raglan, Lord Fitzroy Somerset, younger son of the fifth Duke of Beaufort, has several claims to fame. In 1815 he lost his arm at the Battle of Waterloo and invented the ‘Raglan sleeve’ – still used in modern clothing – to make it easier for him to put on his coat when using only one hand and arm!

Fifty years later he was the Field Marshall commanding the British army in the Crimean War. He is credited with giving the order for the heroic, but totally insane, Charge of the Light Brigade (1854), where 700 cavalrymen charged straight at the massed guns of the Russian Artillery and only 200 survived. He would have been well known to Coachman John and Housekeeper Elizabeth and he is buried at Badminton.

Elizabeth would also have been familiar with many of the artefacts originally at Raglan Castle as after the Castle was severely damaged in the English Civil War, much of the timber, panelling, furniture and family portraits were taken to Badminton House which then became the principal Beaufort residence.

Thus for the past two centuries, from  Badminton to Raglan, through seven generations of Silverthornes, from coachman John to the present generation, the Beaufort factor is still with us!